Please note that while I don't advocate doing this to your own home microwave...it's really cool!

Before you take a look at the video consider the definition of a fractal...

A fractal is "a rough or fragmented geometric shape that can be split into parts, each of which is (at least approximately) a reduced-size copy of the whole," a property called self-similarity. Roots of mathematical interest on fractals can be traced back to the late 19th Century; however, the term "fractal" was coined by Benoît Mandelbrot in 1975 and was derived from the Latin fractusequation that undergoes iteration, a form of feedback based on recursion. meaning "broken" or "fractured." A mathematical fractal is based on an

A fractal often has the following features:

Because they appear similar at all levels of magnification, fractals are often considered to be infinitely complex (in informal terms). Natural objects that approximate fractals to a degree include clouds, mountain ranges, lightning bolts, coastlines, snow flakes, various vegetables (cauliflower and broccoli), and animal coloration patterns. However, not all self-similar objects are fractals—for example, the real line (a straight Euclidean line) is formally self-similar but fails to have other fractal characteristics; for instance, it is regular enough to be described in Euclidean terms. (Source: http://en.wikipedia.org/wiki/Fractal)

And this is what happens when you try and make some out of a CD...

If the controls don't load just double-click on the box below to load the video... 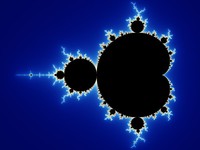